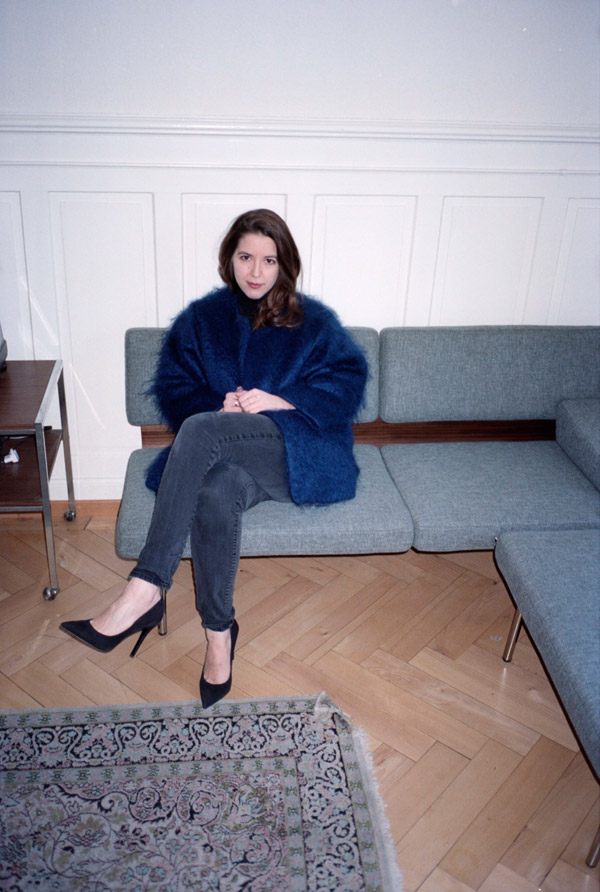 Stefanie Biggel is a Swiss-born designer who after having spent a year in London, relocated to Athens with a desire to understand the possibilities of placing herself within a frenetic, layered and confusing place, during global trouble. Biggel began working on her current collection in response to her localities. Athens, London, Zurich. A response to the overflowing nature of the way we receive information today. Piece by piece she began creating a collection built around opposing factors, layers of locality and information, opinion and response to it, fact and fiction.

There was just one cohesive theme that could be applied to this milieu – that was Hysteria. The year that gave us break downs of political correctness and superstar celebrity, a total disparity.
Positives and negatives and grey areas, making the general view of possibility impossible to describe in a single linear fashion. It felt like a rich moment – a timely cultural melting pot to extract what felt right – what could be applied to Stefanie Biggel within the context of her everywoman clothing.

The designer combined the elements to offer a new uniform that spoke of a moment for herself as a woman. Elements of hyper-sexualised or fetishised femininity in the form of transparent plastic or satin negligés that became the linings to concrete looking suede dresses – that become a surreal camouflage set against the concrete jungles of 1st World Europe. Trompe l’oeil drawn pinstripes and hysterical collaged motifs, both printed, birth a foundation in layering. New School meets Anarchism, Gallant English stripes shake hands with The Oscars, in the form of rubbery golds. Entry level white Karate belts tighten the Hysteria as a statement of trained intent.

Stefanie continues her ongoing collaboration with Textile Artist – Klaus Jürgen Schmidt – in surface designs and accessories. Her seasons are not labeled. Every collection stands as a unique project.

„Hysteria“ is a wild combination with the elements of womanhood that Stefanie has adopted as he own. In a time of change she felt it was time to edit her influences and take what was absolutely necessary in to her collection, with the allowance of fun and femininity within the study of the serious.